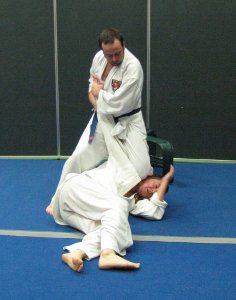 I had a successful grading for Hapkido today, where I was awarded a blue belt with two red tabs (exactly half-way between white and black belts – at least in terms of belt numbers…).

It had been a long time between gradings. My last one was in 2002, back when I was a member of the Dunedin (New Zealand) club. Having moved across the world a couple of times really makes it difficult to stay with the one federation, so it has been good to reconnect with it in Brisbane.