The fan control on the MacBook Pro under Linux is not the best… I would say it does not work at all but I once saw the fan speed increase slightly on its own so it appears to do something, sometimes, according to some logic I can not figure out.

It turns out that taking “manual” control of the fan is quite easy. A simple

echo 1 > /sys/devices/platform/applesmc.768/fan1_manual
sets the fan to manual mode. Then you can adjust fan1_output in the same directory to set the current fan speed. Do not get confused with fan1_input, as that is strangely the actual fan speed! The minimum and maximum speeds are given by fan1_min and fan1_max. If the minimum speed is reported as 0 or 1, ignore it. For MacBook Pros with Core 2 Duo processors the minimum fan speed should be 2000. The maximum fan speed is 6200.

So now that we know how to control the fan, we just need some sort of algorithm to choose what the fan speed should be based on the temperature. The MacBook Pro has a whole bunch of temperature sensors, but the ones that matter are for the processors as they are always the highest. These are found in /sys/devices/platform/coretemp.{0,1}/temp1_input (you may need to load the coretemp module). Montoring these during basic usage shows the average temperatures of the two processors is around 40-45C during idle, 50-55C with basic web browsing and 60-65C when watching a HD movie (at least in warm Australian ambient temperatures).

To save battery on a laptop, I think that the fan should not come on when the computer is doing anything less intensive than watching a movie, so I set that fan to kick in at 65C. This coincides with what Mac OSX does. From OSX, it appears that the fans should hit full speed at 80C and the speed builds up exponentially to that point. The formula I use for changing the fan speed when the temperature is increasing is:

When the temperature is decreasing, I prefer to keep the fan going slightly longer to force the temperature down to low levels as quickly as possible. I push it back down to 55C using this formula: 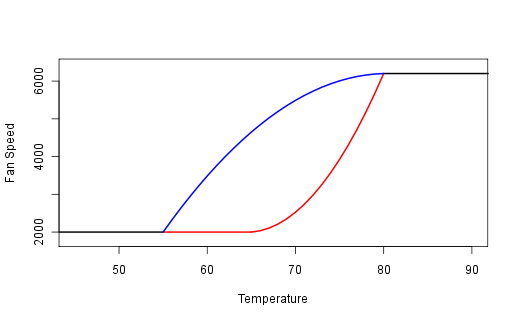 Grap the source code here. It assumes two processors and a single fan (not true for all MacBook Pros…). For Arch Linux users, there is also a PKGBUILD and daemon (mbpfan) for ease of use. I am lazy, so there is very little error checking in the code. It works for me but use at your own risk…